The Fortress is the home base for all players in Mists of Noyah. Here players can store items, craft Equipment, farm and refine crops, and more. The fortress is attacked by enemies and night creatures in the world and must be protected.NPCs also live here and provide the player with useful services.

Portals that provide a shortcut to different biomes are found at the Westmost (far left) corner of the fortress. While the first portal serves as a return point for the Warp scroll, the remaining portals are colored and ordered to represent their destinations.

Portals will have a black glow around them at night indicating a Black Hole as appeared within the connected biome. All shortcut portals will warp you to the connected area, not requiring map changes or much trekking.

All structures in the fort provide a useful crafting service for players. Some can be entered and offer a couple of functions which others provide services by simply interacting with them.

The front of the inn is the player's respawn point. Froggo and the Chef stand on either side to sell you warp scrolls and cooking supplies respectively. Inside, it provides two services.

Located inside on the left, the Storage you can store items to free up space in your inventory. You can also buy more storage space if you have money. Each storage tab contains 48 slots. Money can also be stored.

Found on the right side of the home, the cooking table is used to Foods and Drinks. Foods and Drinks are consumables items that are used to regenerate your Health Points

and buff your Character. 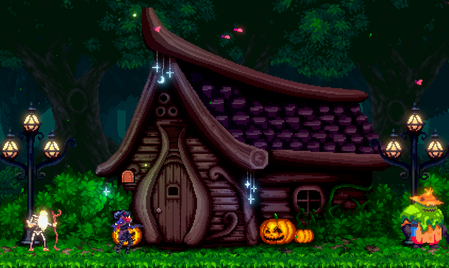 The Alchemist's quarters is a magical building nestle just left of the inn. The Alchemist mills about its doors.. Inside, it provides two services.

On the left side of this structure sits the alchemy desk. Its crafting feature is used to create Potions. Potions are used to restore Health Points

The Enchantment Table has 2 functions, to disenchant and one to enchant Equipment. You disenchant gear to get the crystals (green, blue, or purple) which you can use to strengthen (enchant) equipment. The enchanting process strengthens most stats by a specific percentage. As the enchantment level increases, so does the cost for enchanting and difficulty and risk. 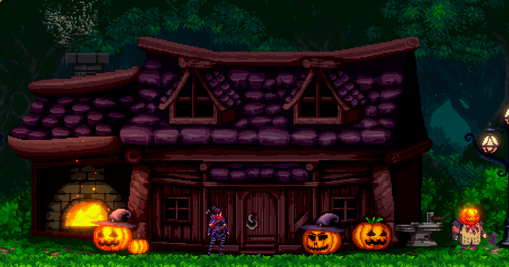 The forge use to craft most equipment and useful reagents for other recipes. It is positioned just right of the inn.

Furnace is for smelting down some Reagents (like a Gold Ore

, and to get coal you can burn Wood

in the furnace. Coal

is used in a LOT of crafting materials so it's always good to stockpile it when you can.

The Anvil is for crafting Weapons, Armor, Accessories, and Tools and Fishing Rods. Crafting from the anvil is a great way to produce numerous items that can be disenchanted as well as generate higher quality gear more at a faster rate than farming enemies.

The Blacksmith NPC works near the forge and sells coal.

The farm is used for growing reagents used for crafting Consumables. The farmer NPC is working next to the farm and sells seeds that as sed to grow crops. Players can plant the seeds that take 3, in-game days to mature. When ripe to harvest the player interacts with the crop. The mature crops produce seeds along with the mature product. Players can plant up to 7 crops in different plots. 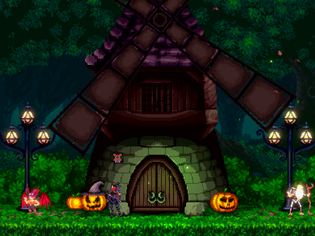 The Tinkerer is found near the windmill and sells the screw.

An Enchanter was added in the Halloween update (2021). It is used to access Dungeons.

The Tinkerer stands on the opposite side of the Windmill.

On every 7th day of the week, the Corrupted Creatures will raid your home city and try to destroy your crystal. If they succeed, the world is no longer playable. If you successfully fend off the raid, you are rewarded with a treasure chest at the crystal awarding rare resources and Consumables. As the corruption level rises, so does the difficulty of the raid.

The Protection Gates have the function of protecting your fort and NPCs from external enemies. It's very important that you have the gates in your fort so that you don't lose the game, especially every seven days.

You will need to go through the fort to find all the crafting stations, there are multiple buildings with crafting stations where you can make useful equipment. Once you have selected something to craft, you will see it's progress bar below. When it is done, simply right click the item to move it to your inventory. Once you have enough materials to craft an item, it works the same way as smelting. Select the item to craft, wait for it to finish and then collect the item. You don't have to stay at the crafting station while things smelt or craft. You can command it to smelt or craft as much as you want (provided you have materials) and it will continue to make them while you are off doing other things. Just don't forget to collect your finished goods before you save and quit, because anything left in the smelter or the crafting table will be lost if you don't collect it before you save and exit!